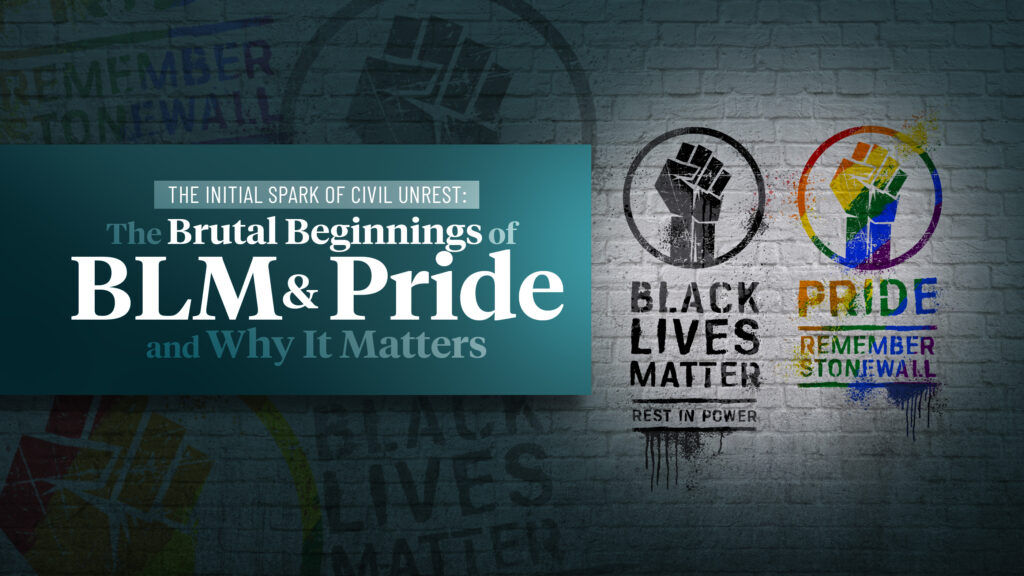 In the month of June, we typically see rainbow flags beginning to adorn our cities in preparation for parades and parties, rainbows and support take over our social media feeds and colorful overlays cover corporate logos. June is the month that we celebrate Pride. The designated time that we collectively acknowledge and uplift the LGBTQ+ Community. However, this June, the Black Lives Matter movement has reached world-wide support and is at the forefront of our mind and news feeds. What is interesting about this occurring at this particular time, is that both BLM and Pride actually share some similarities and overlapping historical beginnings.

June was not a randomly chosen month for Pride, but actually the anniversary of an incredibly significant event in all of our history. On June 28th, 1969, a small group marginalized people rose up against the brutal force being taken against them and chose to fight back. This event is commonly referred to as the Stonewall Riots. The Stonewall Inn, where the event took place, stood as a safe haven for much of the sidelined portion of the LGBTQ+ Community of its time. Their patrons mostly included people of color, transgender women and men, homeless youth and any others generally deemed “less acceptable” by the more mainstream Community. Stonewall stood as one of the few places that the members were able to commune without fear of police brutality for merely existing. However, on the night of June 28th, 1969 a police raid took place, under the guise of an unlawful liquor license inspection and what was known as standard police violence ensued. According to eyewitness reports, it was after officer’s physical and sexual attacks on multiple people that two transgender women ended up pushing back. Marsha P. Johnson was of the first to strike a blow and Sylvia Rivera then followed while also calling on the crowd that had gathered outside. Seeing what was happening around them, the crowd responded and began fighting to protect the people they could. That night, the people took a stand – not knowing that they were about to change history, only that they had finally had enough and chose to do something.

In the days and weeks that followed, the LGBTQ+ community came together, organized sit-ins and protests and in many cases practiced many of the styles of the Civil Rights Movement.  Over the next year they worked together on general messaging, and how to provide ongoing support and outreach to those within the LGBTQ+ community.  It was then ultimately decided that they would not hide or be ashamed for being who they were – they would be gay, with pride.  Thus, Gay Pride was born.  On the anniversary of the riot at the Stonewall Inn, June 28th, 1970, the first parades were held in celebration of Pride.  Many cities began to follow, and Gay Pride became a statement and annual tradition.

It has now been almost fifty years since that first night and the movement that followed. This June, during what would be that celebrated month, millions of people of all races, genders and sexual identities have swarmed the streets of their cities to stand up against over-policing, brutality, and injustice once again. This time however, it is to protect the whole of the Black Community. It is now, once again recognized that a group of people is being targeted for who they are, and all too often, brutally attacked – and killed – for merely existing. And just like that night at Stonewall, people have fought back, took a stand, and cried out to the crowds to stand with them. The world all over has responded and people have crowded the streets to protect those that they can. As the days and weeks have unfolded, many have organized and come together to create and demand long overdue change.

This June, just like that one in 1969, people have taken a stand – not knowing that they are likely creating historical changes, only knowing that they have finally had enough have chosen to do something about it.

How the uForis helped Domus shorten their rental cycles over 50% and increase their year-over-year monthly rentals by 20%.

3D virtual tours in real estate are not just a fad. They represent the future of selling real estate, especially to a tech-savvy Gen Z marketplace. Of course, if a buyer or renter is local and can actually visit a property, there’s no disputing that’s a desirable option. But for prospective tenants who live far