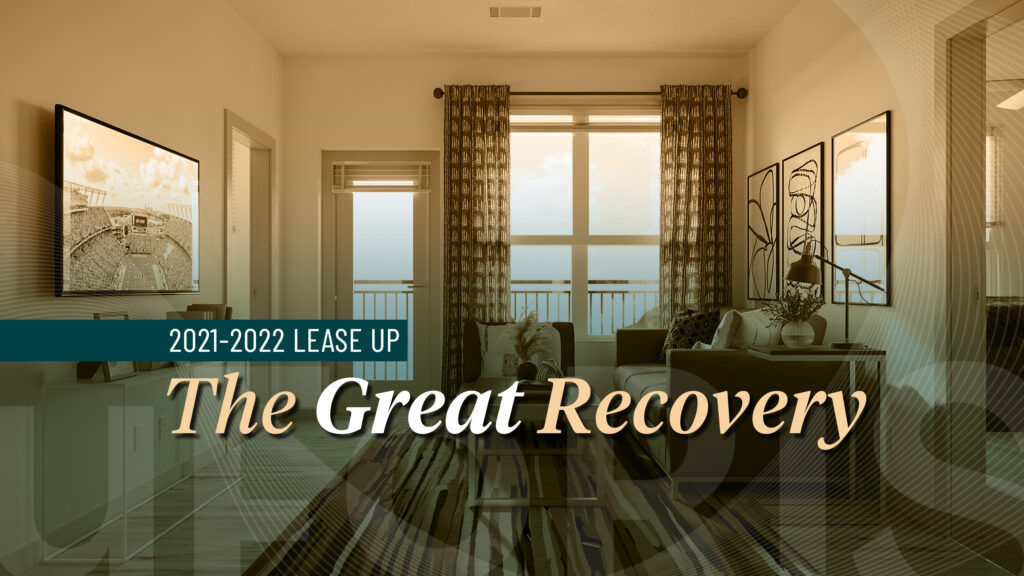 The 2021-2022 Lease Up year began with many questions and thoughts filled with hope.  Coming off of a worldwide pandemic where college campuses had been left mostly barren, without students to hand water bottles or tee shirts to, or residents waiting inside their homes to see which off-campus community might be their next best choice. Many wondered if this year would repeat itself, or if we were finally done hiding away.  It wasn’t just the industry, it was the students, campus officials – and the world.  As each university carefully constructed and sent out the notice to their students, and the ever-awaiting industry stating their plans to re-open campus, everyone wondered – will this last?

As more and more universities opened and students poured into cities all over the country, and from overseas (as allowed), new questions began as well – will they tour onsite? Or will they still only lease online?  How do we need to staff our teams?  How should we budget for marketing?  How much promotional gear do we need for on-the-ground marketing?

Faster than any questions could be answered, pre-leasing began, and hit the ground running.  Our industry was moving faster than anyone anticipated, and with new data that only a few saw coming.

The good news was that the answers to all of the questions came – and they were (mostly) all good, for those that knew what to expect on the ground.

2021-2022 proved what many have been saying for the past several years about the way that the world was moving for online touring and leasing.  While the pandemic had shifted our prospective residents and guarantors to tour and lease online, many debated whether this would remain a long-term habit, or shift back to normal when the world did as well.  This would also mean normal budget and line item spending.  For those that expected this shift to remain, turns out they were right.  While the students returned in person, their leasing habits did not.  Most operators reported at the end of the year that their tours and leases remained consistently online.  This freed up their onsite team members to focus on resident satisfaction, retention, and events.  It also freed up marketing money to be moved into new areas of advertising.

This also meant that many are now looking at the best ways to properly tour and lease online – as they should.  Go where your demographic is.  And as it turns out, they are now online.

The other question that was answered during this comeback year was regarding the lease up as a whole, as well as rates.  And the answer did not disappoint a single side of the country.

As a whole, the industry ended 2% above the previous year, according to College Houses reporting – with Studio Floorplans seeing the highest increase, and One bedrooms falling behind.  Meanwhile, rates made news on multiple calls (and we are sure email chains as well) and publications – as the subject was seen in Student Housing Business, and most recently discussed in the September ShopTalk.  This year, the industry reported over 15% increases across the board.  With 6 bedrooms and 3 bedrooms taking the highest leap.  These two floorplans are generally two of the more difficult to move.  Three bedrooms especially being on many “Don’t do it” lists – in order to avoid roommate concerns and the like.  Alas, here both are, showing up and showing out.

Lastly – a question not previously posed, but answered nonetheless, was about concessions.  Likely because in our industry, it was simply assumed.  It is merely a part of what we do.  Of course, we would have to offer concessions the year we come back from a pandemic, right?  Be competitive.  Be aggressive.  Come out strong and swift, before everyone else – just in case!

Concessions were down as well.  While they likely started out strong, along with possibly low and competitive rates, as one would expect from those seeking to grab up as many available students before the world potentially shuts down and everyone is sent back home again – it didn’t last long.  Instead, the offers slowed down, the rates moved up – and our industry recovered as the world did.

Overall, as we reflect back on all that was and where we ended up – there were crucial items that many have taken away from what turned out to be a great recovery.

Your online presence really is vital to your business – that is where your prospective residents are, so be there, and be great.  Find the best way to tour and lease to them where they are – always.

Put your marketing money where your prospective residents are – never where they aren’t (pssst, again, they are online now).

Offer the best that you have, as early as you can, right at the beginning – set hard deadlines, and then start getting your rates.

Never listen when someone says a floor plan never works.  Market research is important, and every market is different.  That little three-bedroom might be the difference between a loss and a huge win during our next major life event – and wouldn’t that be great?

How the uForis helped Domus shorten their rental cycles over 50% and increase their year-over-year monthly rentals by 20%.

Blog: The Brutal Beginnings of Pride & Why It Matters Right Now

In the month of June, we typically see rainbow flags beginning to adorn our cities in preparation for parades and parties, rainbows and support take over our social media feeds and colorful overlays cover corporate logos. June is the month that we celebrate Pride. The designated time that we collectively acknowledge and uplift the LGBTQ+